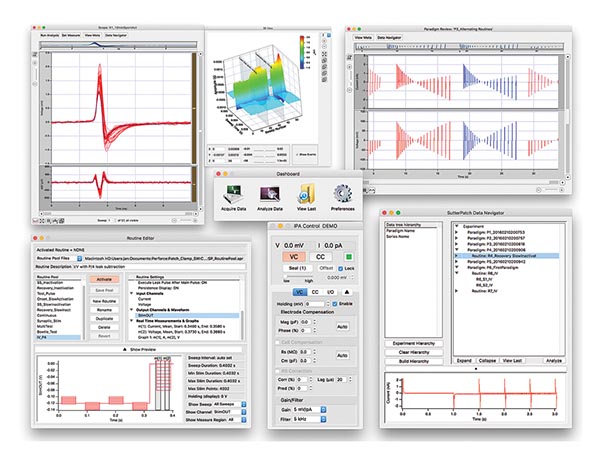 Version 2 of SutterPatch software adds support for the new dPatch® Digital Patch Amplifier System as well as a multitude of new features and user interface improvements that also apply to the IPA Family of Amplifier Systems. The Membrane Test and Free Run have been upgraded. New triple slider and 2D-matrix controls facilitate compensation adjustments in the Amplifier Control Panel.

Particular emphasis was put into intuitive navigation through large data sets. Controls that are familiar from electrophysiology software or applications in other fields, as well as entirely new approaches make finding a particular section of an experiment very easy.

The structured architecture of the data files was designed to retain the context of every sample within an experiment. With little effort at the beginning of an experiment, a plethora of metadata parameters are recorded – automatically where possible, configured by the user where desired. Each parameter can be reviewed before a Paradigm or Routine is executed.

SutterPatch software comes with a collection of sample Paradigms and Routines that facilitate the configuring of commonly executed experimental scenarios.

SutterPatch provides real-time analysis capability that automatically creates graphs like I-V curves or a time course plot while the experiment is in progress. Up to 8 analysis graphs can be shown, each derived from 16 possible measurements from the input signals. Analyses include mean, slope, rise time, frequency of threshold crossing, etc. This facilitates making decisions about the further course of an experiment.

In addition to real-time analysis, SutterPatch supports further processing after the experiment for the most sophisticated analysis procedures. SutterPatch adds application-specific capabilities on top of the expansive analysis feature set that is native to Igor Pro. Equations and Variables facilitate the use of more complex algorithms in both Routines and Paradigms. 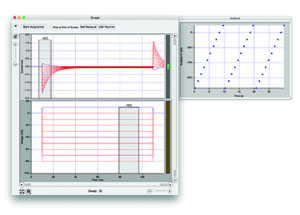 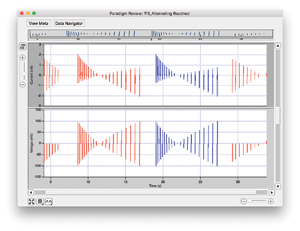 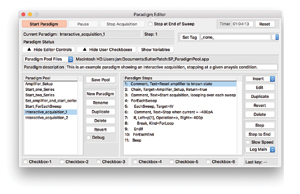 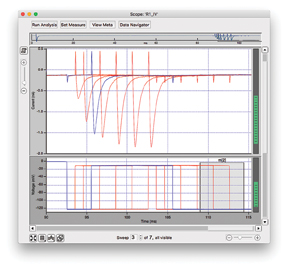 The dynamic clamp technique was first introduced in 1993 as a method for simulating ionic conductances in neurons during patch clamp recordings. This method typically involves recording the cell’s membrane potential, transmitting the data to a computer, calculating the appropriate current to be injected into the neuron, and sending this value back to the amplifier. Communication between the computer and amplifier limits the rate at which the dynamic clamp calculations can be updated. Moreover, the additional hardware and software needed to do dynamic clamp has limited its application. An all-in-one solution is now available as a free upgrade to SutterPatch software and the dPatch amplifier for researchers interested in performing dynamic clamp experiments.

The patented digital architecture of the dPatch amplifier system provides an ideal platform for dynamic clamp. The dPatch is powered by a system-on-chip which provides parallel processing across a Field Programmable Gate Array (FPGA) and two high-speed ARM core processors. Several sophisticated dynamic clamp models are implemented within this architecture. In each model, the update of the applied current values occurs without communication between the dPatch and a computer. Depending upon the complexity of the model, update rates of up to 500 kHz can be achieved.

Simulation of a population of channels within the neuronal membrane involves modeling the kinetics of the channel’s gating mechanisms. These channel kinetics can either be modeled using multiple independent gates as in the Hodgkin-Huxley model, or a multi-state Markov model. For Hodgkin-Huxley style models, the dPatch provides for up to 16 individual gates per simulated channel, with up to eight simulated channels running simultaneously per headstage. For Markov models, up to four 14-state models can be run simultaneously or eight models with fewer states can be run. For example, eight 10-state models can run simultaneously.

SutterPatch software is an intuitive, full featured data acquisition, management and analysis application designed to operate on Windows or Mac OS computers. SutterPatch comes bundled with the dPatch amplifier. The dynamic clamp user interface provides a powerful mechanism for loading dynamic clamp models. No expertise with scripting is required. Gate equations or Markov model transitions are simply entered as text and are interpreted by SutterPatch. Individual dynamic clamp models are saved in a pool and can be easily transferred between users. In addition, a number of sample models are provided to get users started, ranging from a simple leak conductance to a 12-state sodium channel.

To check for High Speed USB 2.0 or USB 3.0 on a PC computer running Windows, look in the Control Panel > Device Manager > Universal Serial Bus controllers section for “Enhanced” host controllers. As this does not provide any mapping information to the computer’s physical ports, and there can be a mix of USB port versions, you should check individual USB ports for USB 2.0/3.0 High Speed operational performance. As a visual indicator, USB 3.0 ports are often color coded blue.

USB hubs are not supported. USB add-in cards, even if they formally meet High Speed or Super Speed specifications, are not recommended. They are often architecturally configured as USB hubs and may lead to intermittent transfer errors that are hard to troubleshoot.

Operating systems installed within virtualization software platforms such as VMware and Parallels are not supported.

SutterPatch Software comes as part of the IPA® Integrated Patch Amplifier and includes a license of Igor Pro 8 by WaveMetrics, Inc. The full installers available on this page include the Igor Pro 8 installer.

Software Trial
If you are planning to evaluate SutterPatch and Igor Pro 8, you can activate a trial license of Igor Pro. After 30 days, a number of features, such as saving, printing and copying to the clipboard will be disabled.