MICROPIPETTES
(See a comparison chart of our micropipette pullers) 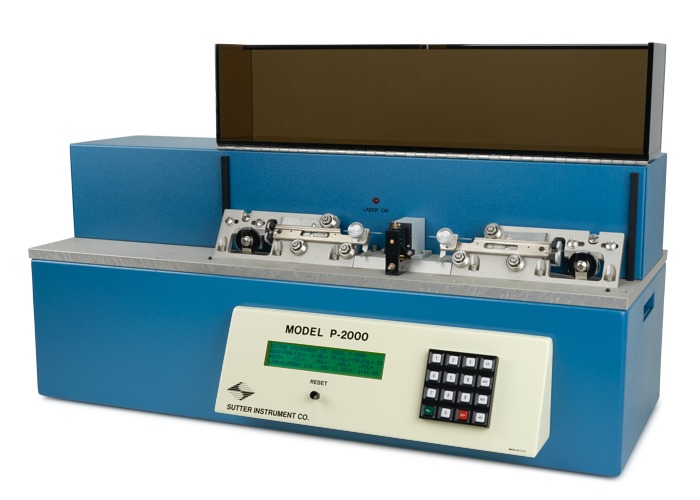 The P-77 Puller was Sutter Instrument's founding product, and the first electronic pipette puller on the market. After 40 years of continual development, we've become the undisputed leader in micropipette pullers.

Forming glass micropipettes at a nanoscale demands precision and sophisticated controls. From years of continued refinement of the micropipette puller, Sutter pullers represent the state-of-the-art in micropipette fabrication. From the ease of use of the P-1000 touch screen display to the P-2000, one of the only pullers available that can fabricate pipettes from pure quartz tubing, Sutter's pullers have become the world standard.

The P-1000 is the latest evolution of the Flaming/Brown™ Style micropipette puller. This puller extends the features of the P-97 by incorporating a color touch screen and integrating new technology that simplifies programming. Unique features such as the safe heat mode, diagnostic testing, line repeat mode and jaw temperature sensor assist in creating the ideal pipette morphology. The pre-installed Sutter Pipette Cookbook, glossary and help topics, make it easy to access the extensive library of programs. Both pullers offer: microprocessor controlled programmability, constant current power supply, a self-contained precision air delivery system, and a patented velocity sensing system. These design elements have lead to significant improvements in pipette reproducibility when compared to other micropipette pullers.

The current state-of-the-art in micropipette puller technology is the P-2000. It incorporates the mechanical design and programmability of the Flaming/Brown pullers, but uses a CO2 laser as the heat source. With the addition of the laser, quartz tubing can now be pulled along with other lower melting point glass compositions. Quartz pipettes have helped eliminate some technical barriers in electrophysiological studies and have enhanced microinjection procedures as well as near field scanning microscopy.

The P-30 is our lowest priced and least sophisticated puller, based upon an NIH design from the 1950s. As a vertical puller, it is intended for basic requisites for a pipette pulling device and provides a few additional features. It is suitable for basic micropipette fabrication, sharp electrode, and microinjection work.